Today, we bring you part one of two of an article from a fellow Vinylmation collector, @goddessofmath aka Joanna.  We hope you enjoy the article and as always you can follow Joanna on Twitter at twitter.com/goddessofmath or you can check her out on her blog called Joanna and her Amazing Technicolor Interwebs.

The question I get the most, aside from “what’s with all the Mickey figures?”, is “what is Vinylmation?”  So before I explain the joys of Vinylmation collecting, I’m going to give you a really quick “what is it”.

Vinylmation figures are made of, you guessed it, vinyl and come in 2 sizes: 3 inch and 9 inch.  The 3 inch figures typically range in price from $10 to $13 while the 9 inch figures are more pricy from $50 to $80.  They all start with a basic shape: Mickey Mouse!
From there, each Vinylmation is painted to look like something other than Mickey and is part of a series. Currently there are over 50 series which you can browse through here on the official Vinylmation site. Each series usually has 12 different Vinylmations in it plus one chaser (a more rare Vinylmation) and sometimes some variants (one that looks like one of the advertised Vinylmation in the series but has changes, usually in color). Vinylmation are normally sold in “blind boxes” meaning you pick a box from a series, but you don’t know what you got until you open the box.  9 inch Vinylmation are always sold in open boxes though.
December 19th, 2008 Disney released the Park 1 series of Vinylmation, and since then they have released numerous series of Vinylmation (over 50 different series) and have gained a HUGE group of collecting fanatics! I love the Park series since the figures all look like places or things in the various Disney Parks. I also adore the Cutesters, Animation, Nerds, and Holiday series.  I have a Vinylmation ice cube tray, and the 3 inch Vinylmation that looks like an ice cube sits in my freezer to make me smile when I get ice.  I also have a Cutester that has bubbles on it to look like a bubble bath that sits on the side of my tub.
Aside from these figures being fairly inexpensive souvenirs, you can trade them in the parks! Similar to the ever-popular pin trading, 3 inch Vinylmation in good condition can be traded in either blind or open trading boxes. Different shops at Walt Disney World have trading stations in them like this: 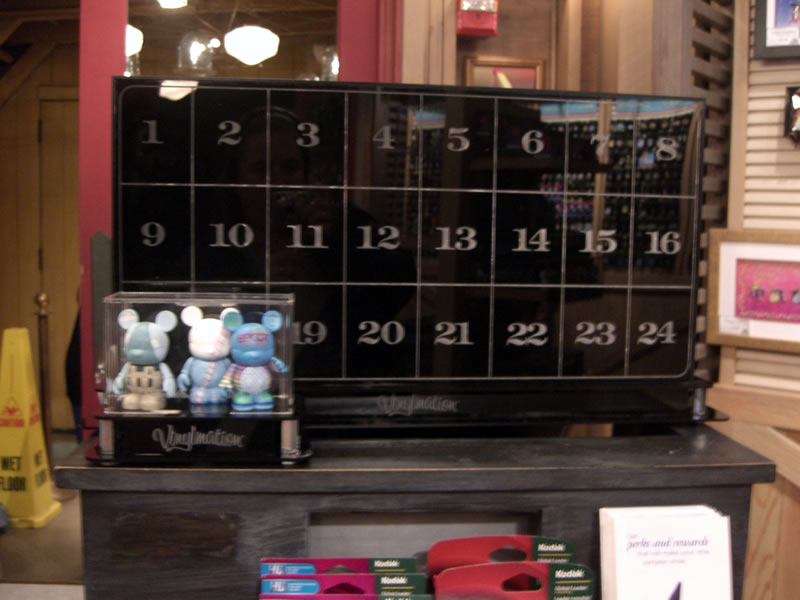 I’m going to stop this post here since it’s getting fairly long and pick up with a trading video in my next post in a few days.

Walt Disney World Shopping Tip #3: Start a collection. I recommend Vinylmation, but anything that makes you smile will do the trick!

Newsmag is your news, entertainment, music fashion website. We provide you with the latest breaking news and videos straight from the entertainment industry.
Contact us: VinylmationWorld@gmail.com

50 Inspiring Teachers Honored With a Magical Weekend at Walt Disney...